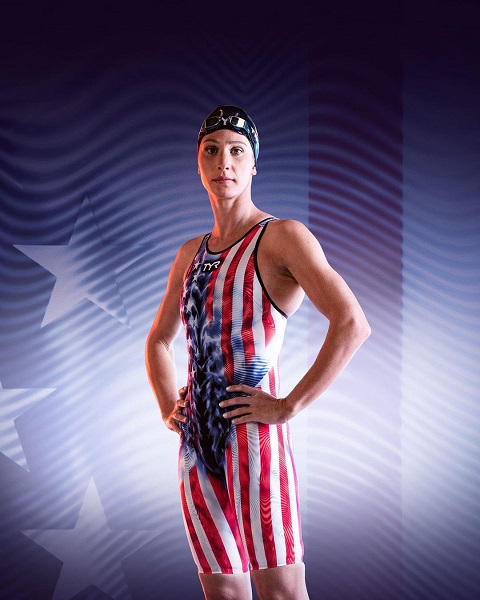 Ashley Twichell is an American Swimmer who has made the public crazy with her exceptional swimming skills. Does she have a husband or a boyfriend?

Ashley Twichell is a competitive swimmer who is representing the United States in the Tokyo Olympics in the Women’s 10k Marathon swimming.

Who is Ashley Twichell?

Ashley is an American swimmer. She is a quite successful swimmer as she has bagged a lot of medals in her professional career. She is currently representing the USA in the Tokyo Olympics 2020.

She is participating in the Women’s 10k marathon swimming. We wish her all the best.

Who is Ashley Twichell Husband?

Ashley Twichell married her best friend, Derek Wall, in 2015 after being engaged in 2014.

They both have been married for six years, and both love swimming, which in fact, brought them together. Derek was her boyfriend for quite some time before the two got together to get married.

Her tall height and toned body provide her an advantage as a swimmer.

Ashley is the daughter of Terry Twichell and Deirdre Twichell. She has three other siblings, who all grew up swimming as all of them were enrolled in a local swim team.

Her birthtown is Mr. Kisco, New York. She did her High School in Fayetteville-Manlius high School and College at Duke University.

Her Networth is estimated to be ranging from $1 Million to $5 million USD. However, these are estimated numbers based on the average salary and net worth of Olympic swimmers in the United States.

What we do know is that Ashley makes enough money to look after her family and provide them a luxurious lifestyle.

Ashley’s first Olympic experience is on the Tokyo Olympics 2020, which is being held from June 2021 onwards. Her Olympic debuting age 32 makes her the oldest American swimmer at the Olympics since 1908.

Throughout her career, she has achieved countless awards, medals, and honors. Her first international award was in 2011 in China, Shanghai on the 2011 World Aquatics Championship winning the Gold in the 5 km Team race and Bronze on the 5 km open water events.

Later in 2011, she got a silver medal in the 800m race in Pan American Games 2011. She earned another Gold Medal in the 10 km open water event in Kazan, Russia.

She achieved a silver medal at the 2016 World Swimming Championships in Windsor, Canada.

Similarly, at the 2017 World Aquatics Championships, she won 2 medals. One gold for 5 km open waters individual event and another silver the next day for 5 km team relay in Budapest, Hungary.

At the 2019 World Aquatic Championships, she finished in 6th position in the 10 km open water swim, which secured her spot for the Summer Olympics in 2020. She, along with her swimming team, got bronze in the 5 km mixed team relay.