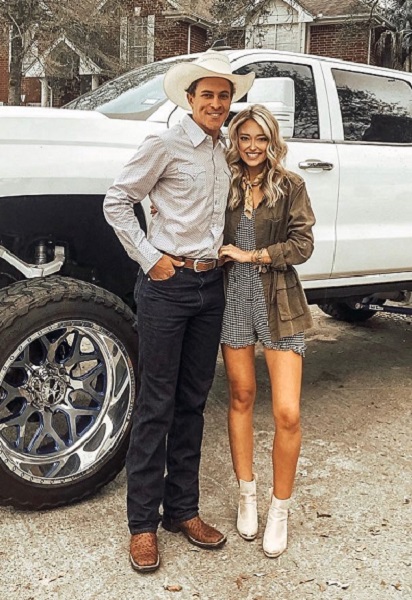 Who is Jessica Birdsong? She is the wife of American professional golfer Cameron Champ. Read the article to know about his net worth.

Cameron Champ is a two-time winner on the PGA Tour who is also a philanthropist working on his Cameron Champ Foundation.

Moreover, Champ won the OFCC/Fighting Illini Invitational and finished in the top 10 of six other tournaments for the Texas A&M Aggies. He finished second to Adam Wise in the Pac-12 Robert Brandi Invitational.

Who Is Cameron Champ?

Cameron Champ is an American professional golf player. He is currently playing in the PGA Tour.

Champ qualified for the 2017 U.S. Open via sectional qualifying, where he had to compete in a playoff.

For a long time, he had Kurt Kowaluk carrying the bag until the start of 2021, at the Sentry Tournament of Champions. Moreover, at the American Express and Waste Management Phoenix Open, he had someone called Chad Reynolds on the bag.

Moreover, Champ generates that distance with ridiculous swing speed: 128.01 miles per hour (also No. 1 on Tour) on trusted Trackman reports.

Cameron Champ is happily married to his wife, Jessica Birdsong.

The couple is newly married as they tied the knot in December 2020. On Dec 3, Cameron took to his Instagram, posting beautiful pictures from the couple’s wedding and captioned one as, “My beautiful Mrs Champ.”

Cameron proposed to Jessica in December 2019 after a few years of dating, and the pair tied the knot a year later. Jessica is a leather artist by profession. She also owns an online store called Roots + Thistle.

Birdsong is a very creative person, and she creates custom-designed leather bags, hats, keychains, and other decorative pieces.

As of now, the couple doesn’t have any children. Maybe they are planning to have one in the near future.

Cameron Champ has an estimated net worth of $4 million.

According to Salary Sport, Cameron Champ has earned total career earnings of $4,655,537.

Further, Champ has numerous sponsorship deals with companies like Ping, First Republic Bank, SAP and Mikuni Sushi. Although he is just in the fourth year of his professional career, he is ranked among the best-youth players in the league.

Get To Know Cameron Champ Parents

His parents Jeff and Lisa, now run a trophy business in Sacramento, California. The golfer’s parents played a key role in his career.

Cameron’s father, Jeff, played two seasons of professional baseball in the Baltimore Orioles organization. Cameron learned many lessons of sportsmanship from his father.

In addition, Cameron comes from a bi-racial family with a Black father and a white mother. Jeff also came from a bi-racial marriage, and Cameron’s grandfather Mack Champ helped him learn to play golf.