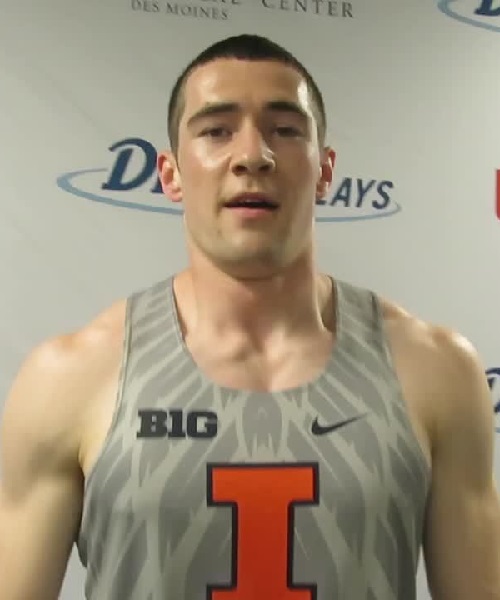 David Kendziera of age 26 is an American Olympic athlete standing at the height of 1.9 meters. Get to know about his parents and girlfriend below.

David Kendziera is 26 years of age.

The professional hurdler was born on September 9, 1994.

Kendziera has a Wikipedia page to his name.

Then at the University of Illinois, he completed his major in Anthropology and minoring in Informatics. There he set the record for the 400meters hurdles. He also earned 10 All-American honors and finished on the podium four times at the NCAA Championships.

Almost a year ago, on 17 September 2020, David ran 49.35 in the Stadio Olimpico in Rome and earned the top ten place for the year worldwide.

Recently the US Olympic Trial was held. David set a personal record of 48.38 seconds in the 400 meters hurdles.

On June 26, 2021, Kendziera qualified for the Tokyo Olympics in the 400m hurdles. He was also placed third in the finals at the US Olympic Trials.

His parents are dad,  David, and Maureen Kendziera. David has one sister, Brenda, and a brother, Ryan.

His sister, Brenda Kendziera, is also a track runner. She is involved in both hurdles and as well as jumps.

In 2019, she took part in the 100m hurdles and long jump at the Illinois Twilight.

She also set her season-best in the long jump with a 4.90m at the Orange & Blue Open. David is in a relationship with his girlfriend, Chelsey Jones. They got started dating in 2018 and now are together for 3 years.

Kendziera’s net worth is not revealed.

Other than an athlete, David is also a yoga and meditation enthusiast. He inspires high school students by talking about leadership skills and success. David aspires to become a Division 1 level track & field coach.