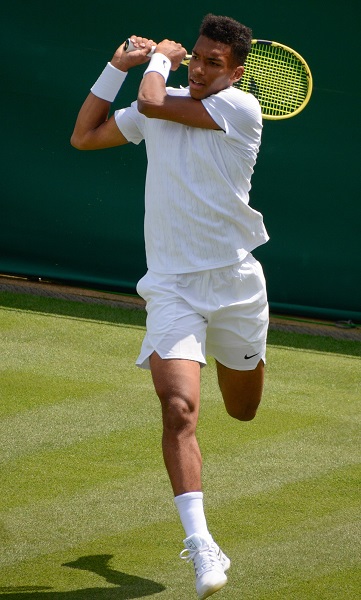 Felix Auger Aliassime girlfriend Nina Ghaibi is no less than a supermodel. Get to know Aliassime’s ethnicity and net worth from here.

Auger Aliassime is a tennis palyer. According to ATP, his current ranking is as the Wolrd’s Number 19 and has a career-best of number 17.

Aliassime is set to face Mikael Ymer in the 2021 Wimbledon Tournament. He recently won against Thiago Monteiro in the first round.

Felix Auger Aliassime’s girlfriend or partner Nina Ghaibi is an athlete too.

She is a professional equestrian. Nina Ghaibi’s age is 20 years old. Although her family hails from Croatia, they reside in California.

Aliassime and Ghaibi began dating in 2019. They have openly confirmed their relationship on Instagram. Nina Ghaibi is active on the platform with the username “nina_ghaibi”. She has 4.8 thousand followers to date.

Felix occasionally posts his fun time with Nina on his social media handle. They recently celebrated Christmas together.

The promising tennis star was raised in a multi-cultural environment. His father is an immigrant from Togo, who also worked in the tennis academy.

He was born in Montreal, Canada. However, currently reside in Monte Carlo, Monaco.

Nevertheless, The youngster had a deal with Adidas ahead of the Australian Open 2021. Furthermore, he also endorses Tag Heuer and Babolat.

He was born in the year 2000 and his birthday is on August 8. According to astrology, he belongs to the Leo sign.