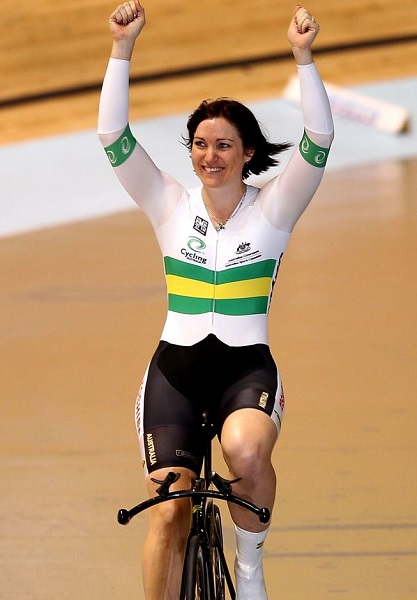 Is Anna Meares Still Married To Mark Chadwick? Meares is one of the most successful female track cyclists in the UCI World Championships.

Meares is the charity ambassador for Port Adelaide Community Youth Program, Little Heroes Foundation, and National Breast Cancer Foundation. She has been a Commonwealth and Olympic Games gold medalist.

Mark Chadwick is the ex-husband of athlete Anna Meares. Chadwick and Meares got married in 2005.

Anna Meares is not married to Mark Chadwick, as they separated in January 2015. Their divorce led to a tough time in Anna’s life, and she almost quit cycling.

Meares did not enjoy riding and lost her confidence, and lost value in what she was doing and herself. It took her a long time to find fun and be passionate about what she does.

Anna Meares’s current partner is Nick Flyger, with whom she shares a daughter. Nick and Anna started dating in 2017. Nick Flyger is a cycling sprint coach.

Does Anna Meares Have Children?

Anna Meares has a child with her boyfriend, Nick Flyger.

Meares and Flyger welcomed their baby, Evelyn Bette Meares Flyger, in February 2020. Anna announced the news on her Instagram and said that motherhood is her best achievement, reports Daily Mail.

Anna Meares announced her pregnancy in September 2019. Nick and Anna were looking for adoption and being foster parents when they unexpectedly announced their pregnancy. Meares was a foster parent and has cared for many children between the ages of four and eight years.

Who Is Anna Meares?

Anna Meares’s age is 37 years. She was born on September 21, 1983, in Blackwater, Queensland, Australia.

Meares represents Rockhampton Cycling Club, and her coach is Gary West. Anna was coached by Ken Tucker from 1999 to 2003. Currently, Anna is sponsored by several big brands such as Toshiba and Uvex safety.

Anna was the captain and flag-bearer at the 2016 Summer Olympics in Rio for the Australian team. Meares retired from her competitive cycling career on October 16, 2016, after being 22 years in the sport, reports ABC.