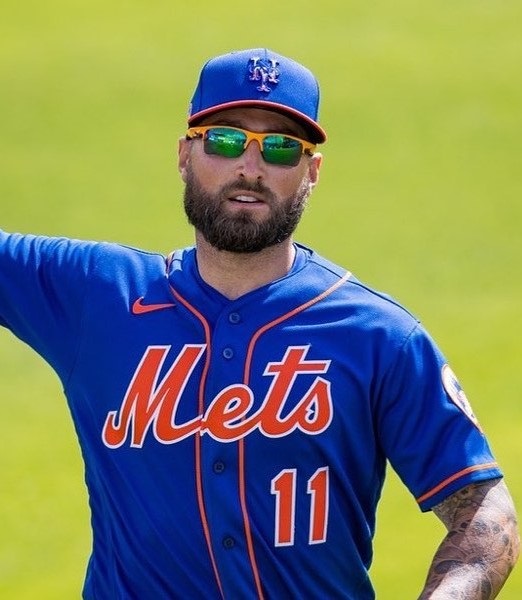 Kevin Pillar suffered Nose and Face Injury on Monday night win over the Braves. Is He Okay? Check out his injury update.

Kevin is a Baseball outfielder. He was struck in the face by a fastball on Monday against the Atlanta Braves.

Kevin Pillar Nose & Face Injury: What happened to him?

Kevin Pillar got a nose and face injury on Monday night against the Atlanta Braves.

Actually, he was hit on the face by a 95 mph fastball, as reported by The Guardian. He immediately exited the game as the injury appeared to be quite serious.

As a result, he could not attend the New York Mets’ win over the Braves.

In fact, Pillar took the fastball from Jacob Webb on the face. In no time, the outfielder fell to the ground. Also, his nose was bleeding with the blow.

Medical personnel immediately reached to him, helping him to get on his feet. Soon, he was taken off the field with towels covering his face.

Luis Rojas told the press that he was taken to the hospital for a CT scan after the game. Rojas is the manager of the Mets.

There was an absolute horror in the pitch for a while. The players were terrified and shock as they watched the injury. Notably, Jacob saw himself off the game.

The outfielder notified that he was doing fine at the moment. Furthermore, he called the scenes to be scary. Also, he celebrated the win of his team in the post.

Thanks to everyone that has reached out! Scary moment but I’m doing fine! #RBI #gamewinner 👍🏽👍🏽

In addition, the Mets provided updates on his injury today morning. They said Pillar has several nasal fractures. Consequently, a facial specialist will see him soon.

Further steps of treatments will be decided as per the analysis of the expert.

Who is Kevin Pillar? Wikipedia

Kevin Pillar is a Baseball outfielder.

Kevin joined the Mets at the start of the 2021 season.

He had signed a one-year contract with $3.6 million guaranteed.

Similarly, Pillar made his MLB debut with the Toronto Blue Jays in 2013. Then he played for the San Francisco Giants, Boston Red Sox, and Colorado Rockies.

The 32-year-old is a warrior on the pitch, as told by his manager, Rojas.