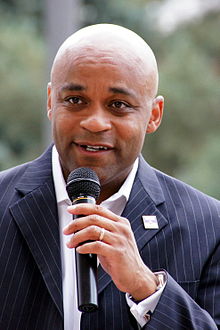 A Democratic party political figure and Biggest Broncos’s fan in the Super Bowl, Michael B. Hancock is an American entrepreneur, author, and deserving politician. He is currently serving as the 45th Mayor of Denver.

In fact, Hancock is also known as the second African-American mayor after Wellington Webb. Moreover, he was also the president of the Denver City Council from 2006-2008.

10 Facts About Michael B Hancock