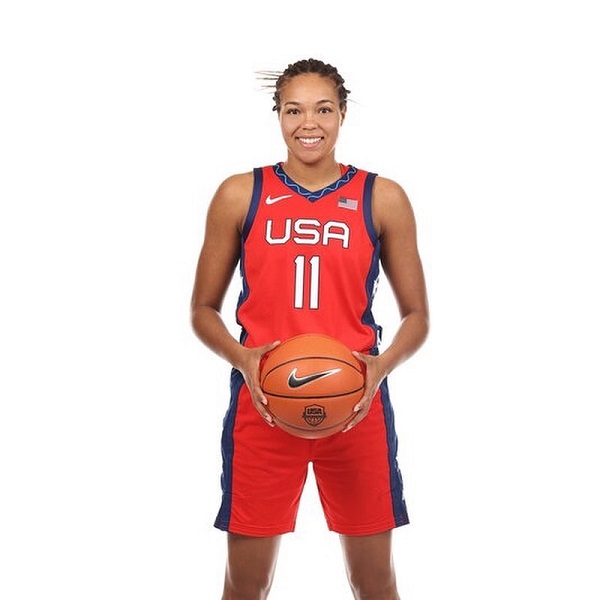 Napheesa Collier is turning heads in the Olympics this season. Does the Olympian have a boyfriend or a fiance?

Napheesa Collier is a professional basketball player from the USA.

She plays as a forward in the Minnesota Lynx of the Women’s National Basketball Association (WNBA). She was awarded the WNBA Rookie of the year 2019 after her graduation the same year.

Napheesa Collier is on her way to stardom by breaking records and turning heads in the world of Basketball.

Who Is Napheesa Collier?

On her debut in WNBA against Chicago Sky, she scored 27 points which is the second-highest debut score ever for any rookie in Women’s Basketball history. She has a salary of $55,059 per year as of August 2021. Napheesa is considered to be the 7th best-paid player of her team Minnesota Lynx.

Napheesa Collier got engaged with Alex Bazzell in October 2019, who is a basketball skills coach. Alex is a Co-Founder/CEO of a company called through the lens. The Instagram account is made to post basketball videos from which basketball enthusiasts can learn more.

Alex was born on 20th April 1990, which makes him 31 years old. He is a famous basketball player now turned into a skilled coach.

His Instagram is filled with basketball pictures and videos. Through the lens also has a Youtube channel with almost 15k subscribers.

He is also NBA/ WNBA skills coach. He has been a great name in the basketball industry.

The couple hasn’t posted anything much about their relationship on Instagram. Their social media is just about the sport mostly. Maybe they like to keep things private.

They are a famous basketball couple followed by many fans. Napheesa’s Instagram account has 80k followers who believe and support her.

Who Are Napheesa Collier’s Parents?

Napheesa was always into basketball as she played for Jefferson City High School in Missouri. She was awarded Gatorade Missouri Player of the Year in 2013 and 2015. She also competed on the high school track team.

After High School, she went on to the University of Connecticut, where she was recruited in their women’s Basketball team. She represented UConn during her college years, and she did wonderful as a basketball player.

She ended up ranking 3rd, 4th, and 7th in scoring, rebounds, and blocks, respectively. With such spectacular statistics, she received the Katrina McClain Award for Power Forward of the Year from the Naismith Memorial Basketball Hall of Fame in 2016.