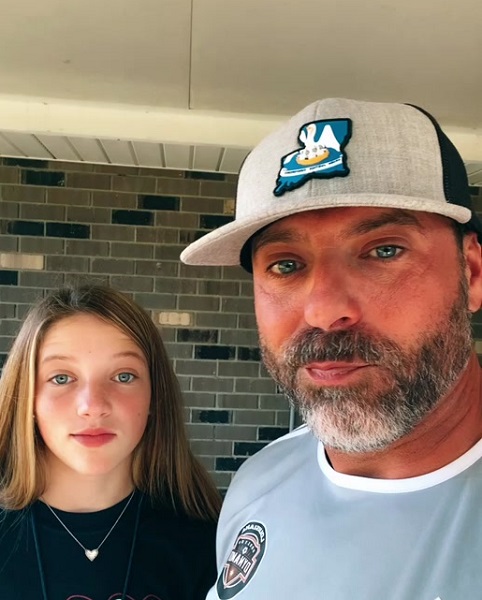 Put It On A Cracker Dude is known as EROCK. His famous tiktok profile heyerock has been a South Lousiana Tiktok star.

The father and daughter duo started making videos every day just for fun. Their main motive was to kill their boredom and keep themselves occupied during the pandemic.

What is Put it on a Cracker Dude Tiktok? Meme Explained

Soon their Put it on a cracker dude video on tiktok went viral.

Cracker is a plain biscuit famous in Lousiana as they use to with any dip, food, and curry they make. It’s like Bread for French people or Nachos for Mexicans.

More and more people who live in Lousiana and have Lousiana roots started loving their videos. People could relate their phrases, slang, and culture. It brought back memories of their loved ones and childhood.

Check us out on the HeyEROCK podcast. New episode is out and it’s definitely a fun one with @hey_corey and @heysherock ##Louisiana ##cajun ##podcast

Eric is known as the Soccer Dad and enjoys fishing, spending time in the water. He also loves cooking cajun food and sharing recipes, BBQs, and drinking a lot of beer.

He believes that Cajun English is dying. So to keep it alive, he is making videos about how to pronounce words and phrases right along with their meaning.

Currently, his tiktok account has over 267.9k followers, with 4.2 million likes. He says that his intention was never to be a sensation on social media. But destiny had some other plans for him, and now he is a big Louisiana star.

Eric’s journey on tiktok as heyerock started with his beautiful daughter Ashlyn.

He has started his Podcast called Heyerockpodcast. His merchandise called Coullion has been selling like hotcakes. He sells teeshirts, hoodies, mugs, beach towels, phone cases, onesies for babies, face masks, wall tapestry, and many more.

The exciting thing is the meaning of Coullion. It is also spelled as Couyon, which means Fool or Crazy in French. It is used as an everyday and fun slang by the people in Lousiana who speak Cajun English.

He believes in providing awareness about South Lousiana and its culture to the world. The dialect of South Lousiana is what he promotes in a fun and creative way. No wonder his content is loved by many and has a wide range of fan following.

Eric has been a great influencer in terms of educating about his roots and culture. His humor and content creation have made so many people laugh and smile. He wants to continue keeping the smile on people’s faces with his talent!