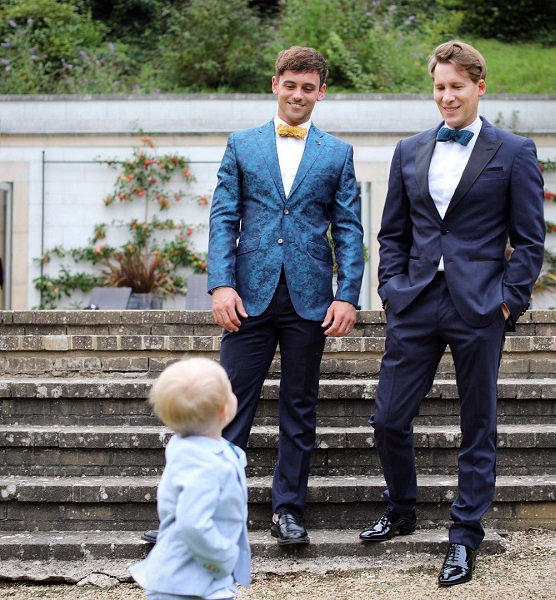 Tom Daley and Dustin Lance Black are the proud parents of a baby boy; one who is equally each of theirs.

In 2008, Tom made history by becoming the youngest ever British diver to compete in the Olympics at just 14, and he is now a gold medallist and married man, and a dad.

Furthermore, Tom Daley’s husband, Dustin Lance Black is an American screenwriter and director, who has won multiple awards for his work.

Dustin is now an LGBT activist and a member of the American Foundation for Equal Rights.

The couple opened up in a recent interview with The Telegraph about their new lives as dads to son Robert “Robbie” Ray, who arrived June 27 via surrogate, and how neither knows which of them is his biological father.

As of now Robbie is an alone child and doesn’t have any siblings.

Moreover, Robert’s name has an emotional attachment to Tom, as he named his son after the athlete’s father who died in 2011 after battling cancer. It is also Daley’s middle name.

The couple celebrated their fourth wedding anniversary this year after tying the knot back in 2017.

It’s unclear when his birthday falls, but as per Tom’s Instagram post, they celebrated his son’s birthday in late June.

As per the Sun, “In late June the pair announced the birth of their first child Robert Ray Black-Daley.”

They were pictured holding the baby scan out to the camera as they hugged each other.

Who Is The Mum Of Robert Ray?

Robert’s biological parent’s names and details have not been disclosed.

The couple had hidden the mother, so some of their own personal reasons. However, Tom and Dustin are an extremely close relationship with their surrogate.

They tell the U.K. outlet. “She becomes such a massive part of your life for those nine months,” says the Olympic diver. “You’re only matched with people who have the same desire. Some don’t want to have long-term relationships [with the parents].”