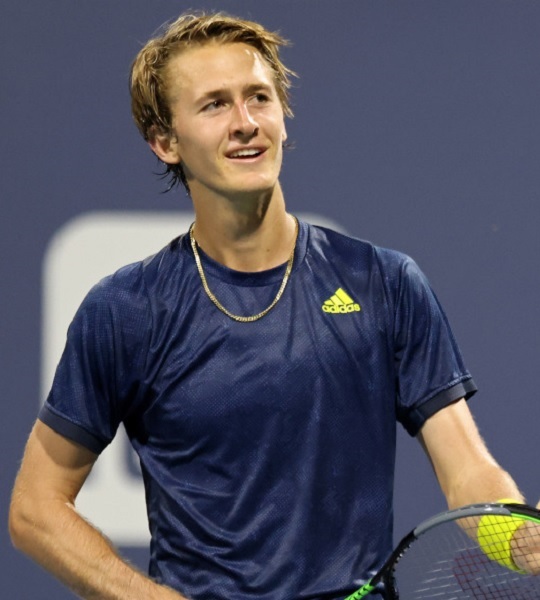 Who is Sebastian Korda wife or girlfriend? The rising tennis star is focused on his first Wimbledon tournament.

Sebastian is a professional tennis player. According to ATP, his current ranking is at 50th position, which he achieved in May 2021. He has won one single ATP title, the 2021 Emilia-Romagna Open. He is currently facing Karen Khachanov in the 2021 Wimbledon.

Sebastian Korda has no wife.

The couple was having a fantastic time earlier in June 2021. They were spotted enjoying themselves at a beach. Korda’s partner Ivana Nedved is no less than a supermodel. She is the daughter of Czech footballer Pavel Nedved.

Sebastian and Ivana are said to have met in Parma during his ATP250 matches. The duo toured Europe together during the Clay season. After the tournament in Parma, Ivana published a nice post on Instagram. She captioned it about being their first tournament together.

For now, Ivana is active on the platform with the username “@ivananedved”. The account has 74.3 thousand followers until today.

His Parents And Family Details

The tennis star got his genes from both his father and mother. They both were famous professional tennis players of their time. Nevertheless, the Korda family has represented the Czech Republic at the Olympics and various competitions.

Sebastian Korda’s father, Petr Korda, reached the highest ranking of No. 2 in 1998.

His career ended when he was tested positive for doping. Later he retired before the ban lifted. Similarly, Sebastian Korda’s mother had her career-best ranking as World No.26.