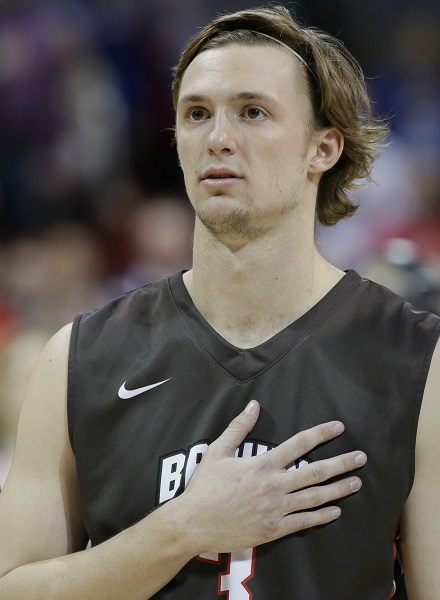 Steven Spieth may be smaller in age than brother Jordan Spieth. But, his height is the tallest in the family.

The Spieth brothers were born with athlete genes. One brother is an international golfer, while the other is a professional basketball player.

Younger Steven no longer lives under the shadow of his older sibling. He has established his name on the basketball court.

Steven Spieth Age – How Old Is He?

Steven Spieth is the age of 26 years old.

He was born on January 25, 1995, in Dallas, Texas. Likewise, Steven Spieth was born as the second child to his parents Shawn Spieth and Mary Christine Spieth.

Steven Spieth is the younger brother of Jordan Speith.

Jordan is none other than former number one golfer and 2015 FedEx Cup champion. Likewise, he was born 2 years prior to Steven and is 27 years old.

Steven Spieth also has a sister named Ellie Spieth. She is suffering from autism and was diagnosed with a neurological disorder at birth. Nonetheless, the siblings hold an extremely close bond with each other.

He towers his older brother, who is 6 feet and 1 inch tall, by an additional five inches. Interestingly, he seems like the tallest in the family.

This explains why Steven Spieth is a basketball player. He was a member of the basketball team of the prestigious Brown Unievrsity. Similarly, he also became Rookie player of the week 3 times while playing for Brown.

He continued his passion even after graduation. From 2017 to 2018, he was a professional player for the Obras Sanitarias. Later he also played for Hkk Zrinjski and Liberbank Oviedo.

However, Spieth seems on a basketball hiatus since June 2019.

But, you can discover him on Twitter as @StevenSpieth. He is followed by over 2k people. Likewise, his IG handle is @sspieth3.

The athlete loves posting about his partner on his social media. In fact, Steven Spieth is dating his girlfriend Maeve Flaherty for a while now. Moreover, the couple recently got engaged in May 2021.

As for now, Steven works as a Sales Associate for Discovery Land Company. Before that, he served as a Financial analyst for Colliers Internationals in 2019.

If you are wondering how he got the job, Speith is a graduate of Business and managerial economics from Brown. He’s got both, body and the brain.