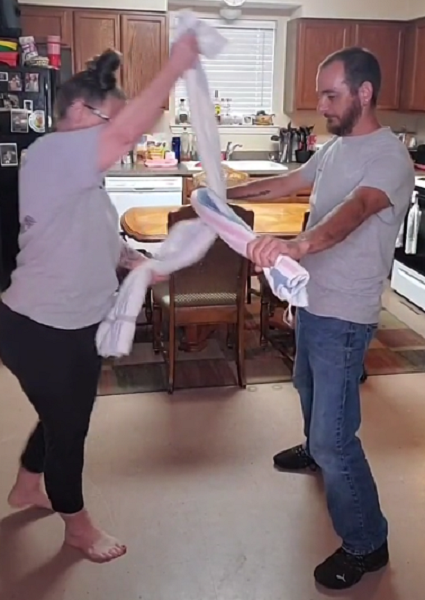 The Tiktok Towel Challenge has been solved. Here is how to do it.

If you are up to date with Tiktok, then you probably know the Tiktok Towel Challange.

Though it sounds straightforward, the challenge has been deemed impossible to do! Everyone duo from couples, siblings to friends, has attempted the challenge and failed miserably.

The Tiktok Towel Challange has finally been solved.

A handful of TikTok users have found a way to solve the challenge. But, it not neither easy to do nor easy to follow!

The Tiktok Towel challenge involves two people looped by each other’s towels. The mission is to unlink the loop without letting their hands off the towel.

The hashtag #twotowelchallenge has over 9.6 million views on Tiktok.

Here Is The Solution And Steps to Towel Trick

However, some users have come up with the solution and steps to the Tiktok Towel challenge.

Here is a simplified guide to doing the challenge:

The same trick was actually used by a user named @sixplusmum with her sister.

However, there are still some questions on if the Towel Challenge is probable!

Is It Possible To Do The Tiktok Towel Challange?

In the video uploaded by @sixplusmum, some comments call out for not showing the full picture in the video. People are claiming that she may have switched hands outside the frame.

Popular Tiktoking twins @vorostwins were also able to the challenge. But, there are accusations that even the twins switched the hand. Some allege that the challenge is actually impossible because two looped towels mean two interlocked rings!

Everybody is attempting the trend and gaining thousands of likes just for attempts nonetheless.

Give it a try. Maybe you will be able to solve it!