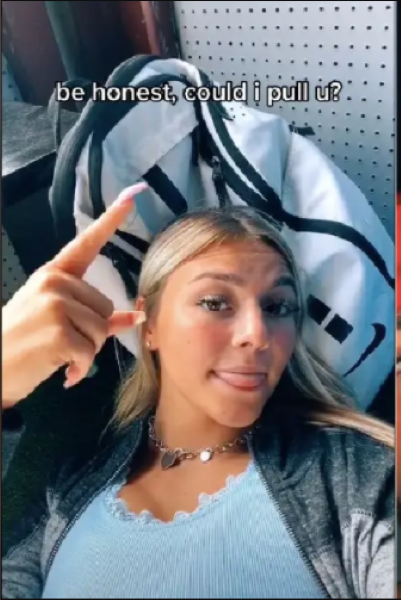 “Could I pull you?” is the new TikTok trend which basically is a Gen Z slang phrase that means “Am I attractive enough for you?”

TikTok content creators are investing a lot of time into creating videos saying “Could I Pull You”. They are making videos making compilations of some of their best pictures and asking you if they could pull you. The trend has gained some grip as more and more people are liking such videos and making it.

We have all known for quite some time that people gravitate towards attractiveness. Especially in the world of social media where you have to be very good in a short frame of time to retain people’s attention, being attractive really helps to increase your followers. Be it Instagram or TikTok, attractiveness sells and people have been milking that or at least people who are attractive are.

This trend is also a continuation of that. It also subtly shows how people are fixated over trying to seek validation from others. The whole trend is essentially someone asking to be called attractive and wanting to be “desired” or even create jealousy on others.

“Could I Pull You?” TikTok Meaning Explained

This text is not supposed to be taken literally. It actually has another meaning than what you would deduce in a literal way. It actually means “Am I attractive enough for you?” or “Would you be interested in me?”

The phrase is casual as casual can be. It’s like saying we are gonna go hang outside. When one uses this sentence, they don’t literally mean they are going to hang. They are saying they will spend time together.

In a similar way, when people are saying if they could pull you on TikTok, it’s not the literal pull. It is saying or rather asking if you would find them attractive and develop a crush on them.

Can I Pull You TikTok – Gen Z Slang Definition

Can I pull you is the trend that’s s Gen Z as Gen Z could get. You don’t see a lot of older people using TikTok. Even in the demographic using TikTok young people are mostly doing this trend. Both boys and girls are hopping on in this trend.

Had to hop on the trend ##fyp ##foryou

Most of the people who are doing this trend are from Generation Z. So, don’t be surprised if people who are older or especially those who don’t use TikTok to understand what pulling you mean.

Some of the videos are really well done and almost look like a professional model’s work. Well, I guess that’s possible when you are really attractive.

What Does Could I Pull You Mean On Urban Dictionary?

Urban Dictionary does have a definition of “pull you”. It doesn’t have the definition of the whole phrase “Could I pull you?” but that’s just how the dictionary work.

The Urban dictionary suggests an even more explicit meaning of this phrase. Apparently, pulling someone means you are hooking up with them. I am being honest with you guys. Check out this link to see the meaning in Urban Dictionary itself.

So, if you are seeing videos like this, what they are asking is whether or not they could hook up with you. This is just how casual it is. After all, it’s better that young people are openly talking about expressing their likeness.