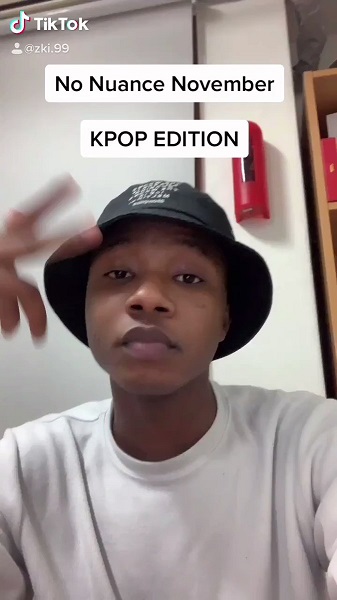 No Nuance November is a new trend that’s getting viral on TikTok. This is a trend that was born as a reaction to “No Nuts November”.

As its name suggests, there is no room for nuance in this trend and one is supposed to just give a blasting sentence or their opinion on anything. The opinion can be on anything you want to express your opinions.

In No Nuts November, you are not supposed to nut for the whole of November. So, some people modified that trend in a  slightly different tone. Instead of not nutting, people are saying a sentence that is extremely out there with no nuance.

As the video explains pretty clearly, this trend is all about being inflammatory and not explaining yourself. Responding and having a conversation would be a nuanced approach. So, that is to be discarded. He has used hashtags such as #blm, #bluelivesmatter, and #anarchism. So, you know his opinion is going to be pretty political.

What Does No Nuance November Mean?

No Nuance November is the new trend that is garnering a lot of attention on TikTok. People are not being nuanced about big topics such as Black lives, racism, liberalism, and a lot of issues concerning the world. Having said that, they are also arguing about breakfast and some other small matters.

This trend is like an antidote to political correctness. A lot of people on the internet are very fastidious these days about the ways one must speak and express their opinions. Even if they think they are fighting for someone else, such extremism could be harmful regardless of their ideology.

So, who wouldn’t love being unhinged and loud about whatever they are feeling. Just say it. Don’t think too much. Tear down the nuance and comment on anything you feel like a subject matter worthy of being commented upon.

She covers a whole lot of topics from beet to white colonialism, coffee, tweezers, milk, and a lot more. It was a roller coaster ride and that’s just how this trend is supposed to be. Nuance should be killed. Go big and be opinionated.

No Nuance November Meme and Joke

I am definitely a bigger fan of TikTok memes videos rather than dance videos. This is why I have found this no nuance November challenge to be pretty funny and stimulating.

People are losing their nuanced opinions and delivering quick hot takes on topics ranging from trivial matters to big topics. Some people are making jokes about this trend as well.

This guy right here is talking about jobs. People are choosing sub-topics and expressing their non-nuanced opinions sometimes but other times, they just let loose and talk about anything their mind wanders to.

There are 1.7 billion views on videos with the hashtag “#nonuancenovember”. That must give you an idea of how big this trend really is.

According to Urban Dictionary, this No Nuance November trend is when you post a daily video on TikTok and mention a non-nuanced opinion about one topic. Some people are saying just one sentence but some are choosing to just go on a rant and cover a whole lot of topics.

Don’t get me wrong, teachers can have such a positive influence. They can also do a lot of harm. ##teacher ##nonuancenovember

These kinds of videos are really wonderful as they give you an insight into a person’s mind. We need more people to be straightforward and communicate. So, go ahead and try to make a No Nuance November by yourself. Remember, kill the Nuance!!!!