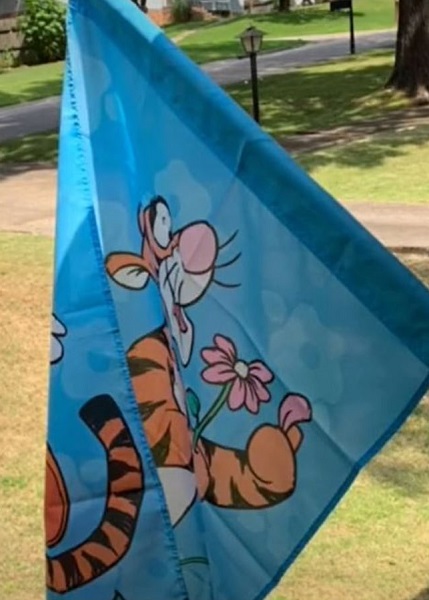 The latest Tigger flag video is creating buzz for trigging a Karen. Does the flag have a hidden meaning? Find out.

Imagine getting annoyed by your neighbor’s cartoon flag. While it may sound absurd for many, the incident really took place in Alabama, USA.

A woman complained to her neighbor for putting the cartoon Tigger flag in her garden.

What Is A Tigger Flag On TikTok?

The Tigger Flag on Tiktok is the latest viral video, what people refer to as “Karen Behavior.”

The video was first uploaded by a Tiktok user named @tizzybizzy92, aka Ambrosia. She posted the camera footage of a conversation that she had with her elderly neighbor.

The unnamed woman in the video confronts Ambrosia for having a “Tigger Flag.” Yes, literally our childhood cartoon character Tigger.

In the clip, the woman approaches Ambrosia and says, “I don’t like the Tigger Flag. It makes the neighborhood look tacky”. While continuing to appreciate the US flag.

On the other hand, @tizzybizzy92 handles the situation like a pro. She replies that everyone has the right to their own opinion and mentions the Tigger flag was hung by her brother.

The video has gone viral like crazy since it was posted. Over 10.7 million people watched the video on Tiktok in the span of four days.

Tigger is our loveable Winnie the Pooh character. Though it is based on an actual tiger, Tigger is nothing like its real animal version. He is mixed with great energy and optimism.

After the public demand, Ambrosia even posted a video about the Tigger flag. It is just Tigger picking daisies flower with blue background.

The harmless flag doesn’t have a specific symbolic meaning behind it. The “Tigger Flag” just makes us nostalgic about childhood – nothing of a political agenda.

However, since the video was posted, people are now jokingly referring Tigger flag as a POC (People of Colour) icon.

Apparently, the viral Karen on the garden video has apologized for the Tigger flag incident.

In another video, Ambrosia posted an update on the incident. She speculates someone told “Karen” about the video – forcing her to apologize.

However, even the apology was bizarre and “drive-by-apology.” According to Ambrosia, the woman just passed away from her house in the car and shouted, “I am sorry.”

The woman in the video remains unidentified to date. Nevertheless, netizens are calling her “Karen.”