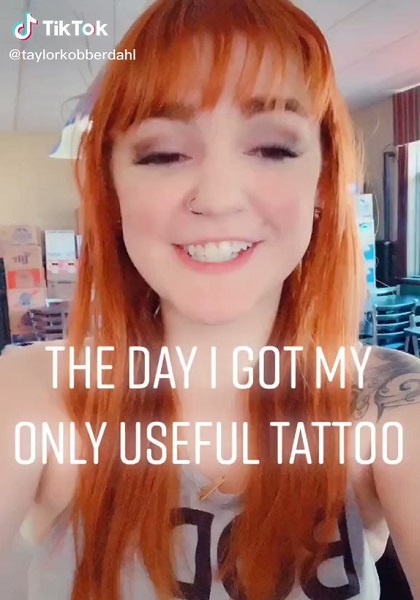 What is Stab The Crab Tattoo on TikTok? It is the exact tattoo place where you made need an emergency shot!

If you get a Tattoo, somebody will definitely ask for its meaning. A TikToker @samaraishere has the most interesting Tattoo of all.

She is the carrier of Stab The Crab tattoo on her thighs and names the crab as Merlin.

What Is Stab The Crab TikTok? Tattoo Meaning Explained

Stab The Crab Tiktok is a witty tattoo to get an emergency EpiPen shot without having to tell anything else.

The Creative mind behind Stab the Crab tattoo is a Tiktok user @samaraishere.

Samara has a peanut allergy that leads to a severe anaphylactic reaction if she eats any. Anaphylaxis can cause low pulse, rash, fainting, and even death in untreated situations.

A quick shot of EpiPen can save lives. It relieves breathing and heart breathe.

Samara Hnaien from Australia is the girl behind Stab The Crab challenge. She has amassed 15.4k followers in her Tiktok.

In 2020, Samara shared her story with a guy named Charles Harris that she met on Tinder. Since this took place amid the COVID-19 pandemic, it was not possible to meet in a public place. So, Harris invited Hnaien to his house and things got real steamy.

The pair started kissing each other. However, little did Charles knew Samara had a peanut allergy and Samara knew Charles had eaten a peanut sandwich before.

Hnaien soon started feeling tingly and questioned Harris if he had eaten peanuts. To her date horror, the answer was yes.

Shortly after Samara asked Charles to inject EpiPen on her thigh. However, he had no idea where to put the shot. Eventually, Charles called an ambulance that took Samara to the hospital.

After she survived the incident, Hnaien decided to get the “Stab The Crab” in her thighs.

Are Charles and Samara Still Together?

During her time in the hospital, Charles supported Samara throughout the procedures. They even made a TikTok that they wanted to go on another date.

However, the couple has called quits to the relationship. In fact, Samara uploaded a Tiktok stating it was just a casual relationship.

Samara still got the cute Stab The Crab Tattoo nonetheless. So, next time she doesn’t have to visit the hospital in a middle of a date.