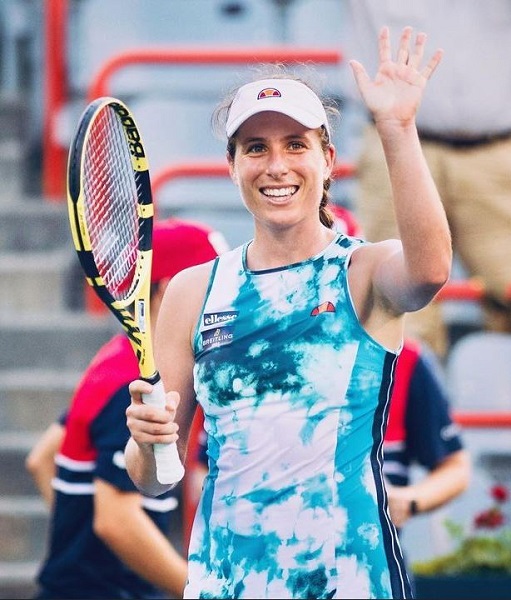 Johanna Konta is married to her husband Wade Jackson. It is reported that the couple has been together since 2017.

Johanna Konta is a professional British tennis player who turned professional in the year 2008 and went on to win four singles titles on the WTA Tour.

Konta is happily married to her husband named Wade Jackson.

Talking about Wade, he is from Newton Aycliffe in County Durham and he works as a Digital Film Making Degree Programme Supervisor.

Moreover, he is also the co-owner of 90SecondStory, which creates films and videos for other businesses throughout the United Kingdom.

The pair started dating each other after Johanna’s Miami Open victory against Caroline Wozniacki in 2017.

Get To Know Johanna Konta Age And Height

The British professional tennis player was born on May 17, 1991, in Sydney, New South Wales, Australia.

She spent her early age in Collaroy which is on Sydney’s Northern Beaches and she was also introduced to tennis at the age of 8 years old.

She attended the Sanchez-Casal Tennis Academy in Barcelona when she was 14 years old. She stayed there for only 15 months when her parents settled in Eastbourne, England.

Moreover, Johanna Konta’s height is 5 feet 11 inches but she has not revealed her weight until now.

It is known that her father is a hotel manager and her mother is a dentist and both her parents had emigrated separately from Hungary and met in Australia.

The professional tennis player’s grandfather Tamaz Kertesz was a football player who played for Ferencvarosi TC.

Also, Konta has a half-sister named Eva Mumford from her father’s previous marriage and her sister is married to an Australian Rules Footballer named Shane Mumford.

Johanna has a total net worth of $4 million.

The British tennis player earns a huge amount of money from her career and she has prize money of $10,039,907.

Moreover, she also earns through several endorsements as she has two main sponsors, that are Ellesse and Babolat.

Also, she was appointed as the first UK ambassador of Nature Valley cereal bars in the year 2017 and also had a deal with British accessories brand Radley.