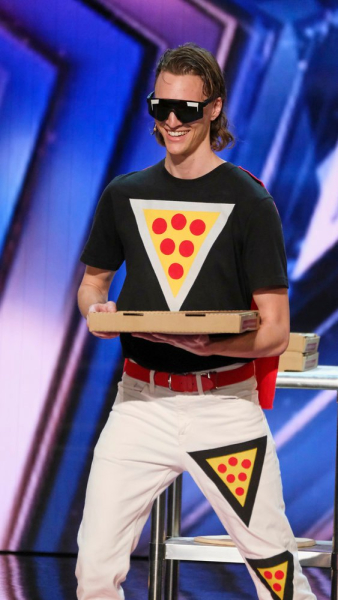 Nick Diesslin aka pizza man is set to appear on AGT’s season 16, episode 8. So, who is The Pizza Man, Nick Diesslin? Find out his age, Wikipedia, and Instagram on this article.

Nick Diesslin, is widely known as the pizza man. He is the one who does a pizza acrobat. He has appeared on many shows, one of them being, ‘The Tonight Show Starring Jimmy Fallon’.

Learn About AGT: Who Is Pizza Man Nick Diesslin?

The Pizza man, Nick Diesslin, is auditioning for the AGT (America’s Got Talent) on July 20, 2021.

He is appearing on the 8th episode of season 16 along with 21 other contestants. Some other performers are Bini the Bunny, Charming Bears, Rialcris Savannah Robertson, The Science Wizard, Sergio Paolo, and more.

So, episode eight will be the final round of the audition. Afterward, the four judges will decide and select only 36 acts to go on to the ‘Live Shows’ from all the acts that got at least three yeses.

Get To Know Nick Diesslin Age – Where Is He From?

He was born in 1991 in Maplewood, Minnesota, United States. Though his birthday has not been disclosed. The pizza man is set to turn 30 years old in 2021.

Does Nick Diesslin Have Wikipedia?

Nick Diesslin is famous but does not have an official Wikipedia page.

There is not much information about his personal life. He has also not disclosed if he has a girlfriend or a wife.

So, how did Nick got into dough throwing? His interest in dough throwing started when he was in middle school.  To begin with, he first practiced with a damp dish towel and studied online videos of dough tossing.

He would perform pizza dough throwing at school and community talent shows. Eventually, he decided to specialize in it.

He even took part in World Pizza Games. Then, in 2012, he became second in the first division category of pizza acrobatics.

I will never be cooler than this moment 😮 https://t.co/c6u0vgtEZj

Nick also got the opportunity to perform in the Minnesota State Fair grandstand in 2018. And now, he will appear on the grand stage of AGT.

Nick Diesslin is on Instagram with the username @pizzamannickdiesslin.

He currently has 180 Instagram followers, but he sure does have more fans. He posts random and funny posts on the platform. His most recent post was about him set to appear on AGT.