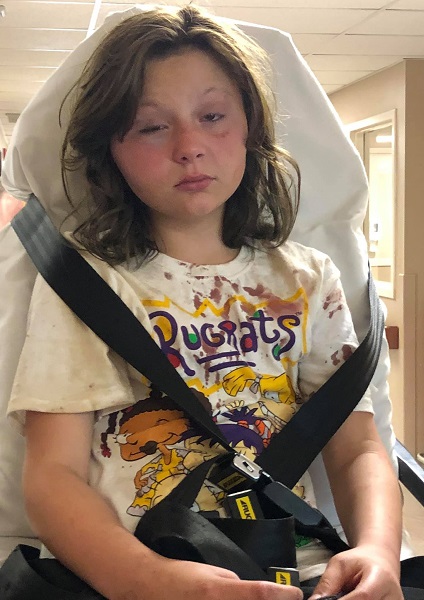 Justice For Callie has been trending on TikTok for the past few days. Read about the 10-years-old Callie O’Connell who was severely beaten by juveniles.

On July 19, 2021, Callie went to play with her friends. Well, this was her routine in the past six months.

However, she immediately knew she was in trouble when she entered her neighbor’s apartment. Later, her mother found her covered in blood.

Her first Facebook post came on the fourth day since the incident, July 22. Reportedly, she asked the authorities for her justice.

Well, she has described her daughter’s entire incident which is heartbreaking. Also, she has posted some disturbing images and videos.

However, some of the photos are too graphic to be shared on social media. As a mother, she is devastated to see her child suffering from so much pain.

Moreover, Brittany has shared the images of the two friends who are responsible for Callie’s current condition. However, their faces have been scratched as they are juveniles.

After facing torture from the neighbors, her daughter lives in fear. Brittany wants the entire world to know her daughter’s story and wants to provide justice for her little one.

TikTok users have supported Callie O’Connell and her mother in their road of justice.

Under the hashtag, #Justiceforcallie, there are 586k+ views already. Everybody on the platform has seemed justice for the young girl.

Reportedly, Brittany revealed that the incident was recorded by the juveniles’ mother. However, she didn’t stop their children from doing such a terrible act.

Well, the recordings were uploaded on Snapchat and TikTok. Most probably, the videos have been removed by social media companies.

According to FOX17, police have arrested the two teenagers for allegedly beating Callie. Now, the authorities have charged them with an aggravated kidnapping and aggravated assault.

Furthermore, the DA’s office finally interviewed the victim. Indeed, the TikTok videos did help in this case and Brittany has finally been able to breathe.

Who Is 10 Year Old Callie O’Connell?

Callie O’Connell is a 10-years-old girl from Elizabethton, Tennessee.

Originally, her family was from Saint Petersburg, Florida. We send our support to Callie and her parents at this crucial moment.

After the incident, we can find Callie’s eyes swollen and her t-shirt was stained with blood. Moreover, she had red marks on her back and wrists.

Reportedly, she was held hostage for almost 5 hours. The teenagers used their fists to beat her and were also dragged to multiple rooms.

There were no arrests until July 22, but finally, the police arrested the juveniles on the fifth day. Right now, the Tennessee Department of Children Services and the Elizabethton Police are investigating the case to know the teenager’s motive.