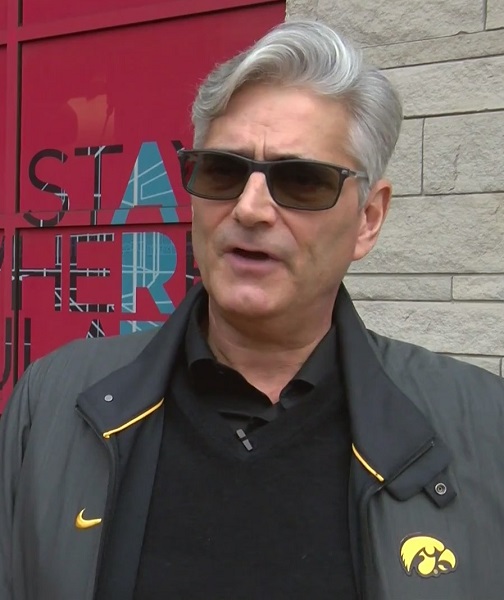 Luka Garza, who played a huge role in making the Iowa Hawkeyes one of the dominant Big Ten Conference teams, will not be playing for the college side anymore. His class academically ends in 2021 and the center will be eyeing the NBA debut soon.

Along with Luka, his father, Frank Garza was also a very popular figure among the fans of Hawkeyes. Passionate for the game, Frank was always there to support his son. Besides, he also played college basketball for Idaho.

Frank Garza doesn’t have a Wikipedia biography of his own but he is mentioned many times in his son’s wiki.

An American by nationality, Frank Garza himself played college basketball for the Idaho University. However, his wife is of European origin who hails from Bosnia and Herzegovina. And incidentally, she also played professional basketball in Europe.

Born to a family who admires basketball, Luka Garza got all the support he needed to become one of the best basketball prospects. His father used to show him videos of NBA legends such as Kareem Abdul-Jabbar.

Hawkeyes, This for the young and developing BB players. If Megan and Luka practice the Mikan, does it make sense for you to practice it as well? This is our 50 shot Mikan with 5 different finishes: lay in, reach back, cross under, jump hook, and skyhook. Earned not given.🦚 pic.twitter.com/8C3JEC0XQN

Frank Garza Net Worth: How much does he earn?

Frank Garza’s current net worth and earnings remain under review. We will update them as soon as possible.

Besides, Frank works as an economist, human development strategist, and visionary and sales at the moment. He has established a scholarship called “Let the Peacock Fly” at the Iowa University. It is the slogan of the Iowa Hawkeyes.

Frank Garza is married to his beautiful wife, Sejla Garza and the couple shares a son, Luka.

All three of them are well-recognized basketball players during their time. Sejla played in Europe whereas Frank and his son, Luka played in the United States. Based in the US, his wife is an executive assistant at the Embassy of Bosnia and Herzegovina.