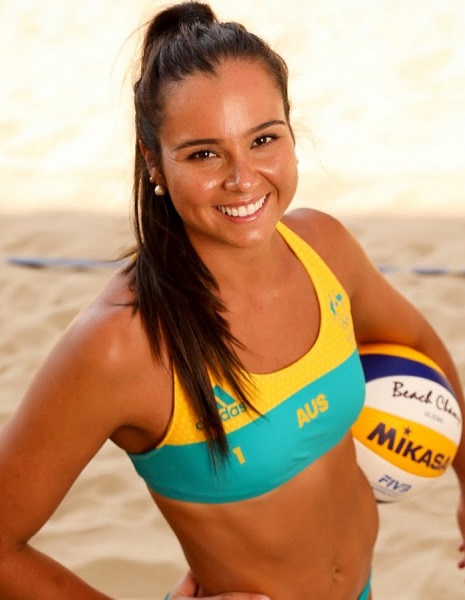 Who Is Mariafe Artacho del Solar Husband? Mariafe is playing beach volleyball in the 2020 Summer Olympics.

Mariafe Artacho del Solar is an Australian beach volleyball player who is playing in the 2020 Summer Olympics in Tokyo. Mariafe plays as a right-sided defender. Artacho has played in the 2018 Commonwealth Games with her partner Taliqua Clancy on the Gold Coast.

Artacho del Solar participated in the 2016 Summer Olympics in Rio de Janeiro. Mariafe and her partner, Taliqua Clancy, were ranked in the 5th position by the Women’s FIVB World Rankings as of January 21, 2020.

According to his LinkedIn profile, Curtin graduated from CQ University with a bachelor’s degree in Business and Sports Management.

Curtin worked as a marketing manager at Chobani from January 2017 to March 2020. At Harcourts International Ltd, Jack Curtin held the position of Australian Marketing Manager from September 2020 to April 2021.

Mariafe Artacho and Jack Curtin love to cook together, watch TV, and spend time with the family.

Jack was Mariafe’s long-time boyfriend before the couple got married in November 2020 in a registry, which was contrasting to their original wedding plans.

Mariafe Artacho del Solar’s parents have always been supportive of her volleyball career.

Artacho moved to Sydney from Lima, Peru with her mother, Isabel, when she was just 11 years old.

Mariafe’s mother is watching her current Olympic games from her home in Peru, as visitors are banned under Japan’s strict coronavirus restrictions, reports SBS.

The volleyball star weighs around 67 kg or 148 lb.

She moved to Adelaide, South Australia, where she attended the Australian Beach Volleyball program.

Mariafe Artacho is playing well in the Olympics in Tokyo.

Mariafe Artacho del Solar who plays beach volleyball at the Olympics is not required to wear bikinis to play the sport.

The head of broadcasting at the Tokyo Games revealed that they will be focusing on the appeal of the sport of the female athletes and not the sex appeal. They will not be highlighting sexualized images of female athletes.