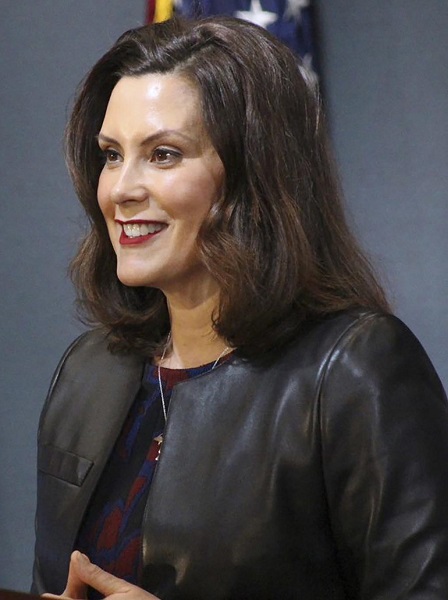 The Michigan Governor, Gretchen Whitmer condemns Donald Trump with a code message sticker, 8645. What does 8645 mean?

People seem to be accusing or offending others in the most creative ways possible. The Satirical condemnation is very famous on social media but it is now practiced at the National and International level. The latest incident in NBC with Michigan Governor, Gretchen Whitmer was a perfect example of it.

During her interview with NBC, Gretchen had a sticker card at the left bottom of her screen and it wrote “8645.” Now there are a lot of ridiculous speculations made on what the code implies. But once you go through people’s theory, it is quite hard to ignore them.

If you are still trying to find out what “8645” meant during Whitmer’s interview, here the complete answer to it.

What does 8654 mean by Gretchen Whitmer?

Whitmer had a sticker captioned with “8654” at the bottom of her screen during her interview with NBC. No one had spotted them until the people in Trump’s campaign did. As a result, Trump’s campaign tweeted about the sticker and its meaning.

As per Trump’s campaign’s tweet, 86 means to kill something and 45, of course, means the 45th president of the United States, Donald Trump. Many of them do not accept this theory as it is stereotypically offensive.

During her interview, Gretchen did slam the president of domestic terrorism. There are a lot of controversial images and videos about the attempted kidnapping of the Michigan governor. However, one has to dive deep into it to extract the facts from speculations.

What does 8654 mean in Urban Dictionary?

Urban Dictionary is the home of all social media slangs that ever exist. So the meaning of 8645 in the Urban Dictionary could really be a headstart. There’s no doubt that the latter “45” represents Donald Trump as it has been used many times before. But what does 86 really mean?

As per Urban Dictionary, 86 means to get rid of or throw out something. Merriam Webster describes the slang as “refusing to serve the customer.” The slang is still widely used in restaurants. It is used when something is finished and the customer can’t be served. Now you cannot tell it directly in front of customers so there’s a code for that.

These meanings do make sense, though. The governor, Whitmer accused president Trump of plotting to kidnap her. The FBI has found a substantial amount of evidence as well. However, nothing much is given away by the FBI yet.

With the elections approaching very quickly, this may as well be a fraud attempt by either of the sides. However, Trump’s campaign has accused Whitmer of violently criticizing the President through slang code. Whitmer, on the other hand, slams Trump for domestic terrorism.

Last night, I said the “lock her up” chant was wrong. And I believe that.

Well today, the Governor encouraged more hate by having an “8645” pin. (Attack? Kill?) This doesn’t help. This is wrong too.

You can’t have your cake and eat it too when it comes to civility and respect.

Matter of fact, it was. It was used in Anti-Trump campaigns, mostly on social media. Later, a lot of T-shirts came out with 8645 stickers on them. But, did Whitmer knowingly put the sticker on her video? Likely so. But did she meant “Attack/ Kill?” Not sure.