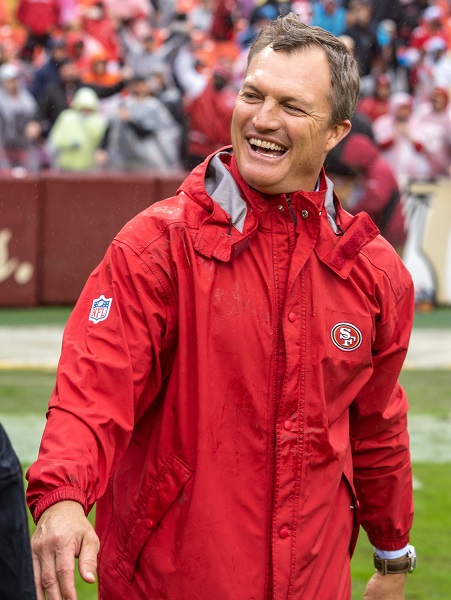 The Hall Of Fame inductee John Lynch encouraged the nation to huddle up as a people in his speech at the Pro Football HOF. Here is what we know about Lynch so far.

John Lynch is an American former football player who started his NFL career with Tampa Bay Buccaneers in 1993. Lynch began his position as the general manager of the San Francisco 49ers of the National Football League in 2017. He has also played with Denver Broncos from 2004 to 2007 and the New England Patriots in 2008.

He played 16 seasons in the NFL, and Lynch is a nine-time pro bowl selection. In Super Bowl XXXVII, John Lynch earned a Super Bowl ring. John Lynch retired in 2008, after years of a successful career.

In 2021, John got inducted into the Pro Football Hall of Fame.

John Lynch had multiple people to thank during his Hall of Fame speech.

All night long! Thanks to ⁦@LionelRichie⁩ for making my ⁦@ProFootballHOF⁩ party just perfect. God willing I’ll have a voice left for tomorrow! God Bless! pic.twitter.com/WzGEZmly4n

In his Pro Football Hall of Fame speech, John Lynch credited his wife for helping him reach this triumphant moment. John thanked his family and friends for their love and support.

Who Is John Lynch’s Wife?

Linda and John first met in seventh grade in their hometown of San Diego.

John Lynch lives with his family in Del Mar, California.

John and Linda have four children together. Their son is Jake Lynch, and their daughters are Leah Lynch, Lilly Lynch, and Lindsay Lynch.

What Is John Lynch’s Net Worth?

John Lynch’s net worth is $8 million, reports Celebrity Net Worth.

John joined as the general manager of the San Francisco 49ers on January 29, 2017. Lynch was honored with the PFWA Executive of the Year in 2019.