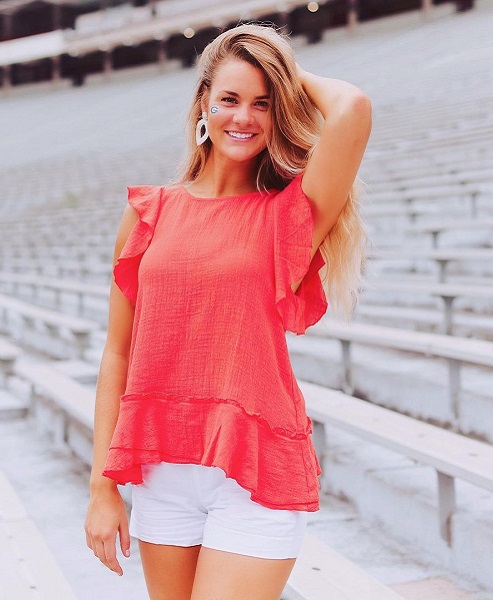 Who is Jake Fromm‘s fiance? Caroline Ostman and Jake Fromm announced their engagement on Instagram.

Caroline Ostman is a former volleyball player who played for The Georgia Bulldogs. According to her profile, she played until 2016 but missed her last year (2017) due to a knee injury.

After her education, Ostman served as a marketing coordinator at PrimeLending. She even worked part-time as a graduate assistant at the University of Georgia Athletic Association. Currently, she is the Associate Market Research Manager of Intuitive.

Caroline Ostman has been officialized as William Jacob Fromm, aka Jake Fromm‘s fiance. The former outside hitter announced that she is going to be married to her dream man.

The couples have been dating for quite a long time. As they are now engaged, they are probably busy with their wedding plans.

Speaking about Jake Fromm, he is a professional football player who currently plays for the Buffalo Bills as their quarterback.

Caroline Ostman’s age in spring 2020 was 23 years old. She celebrates her birthday on April 21.

Her fiance, Jake, is actually a year younger than her. Talking about her height, Caroline is about 5 feet and 10 inches tall.

As per her bio, we can confirm that her parents are Andy Ostman and Erin Ostman. Furthermore, she has three sisters – Allison, Hannah, and Grace.

Well, Caroline’s information is yet to be updated on Wikipedia. However, we can learn everything about her on LinkedIn. According to this site, she had completed her Bachelor’s degree in Finance and Master’s degree in Marketing Research from the University of Georgia – Terry College of Business.

With over 16.7 thousand followers. Caroline Ostman is active on Instagram. If you wish to follow her, here is her username @carolineostman.