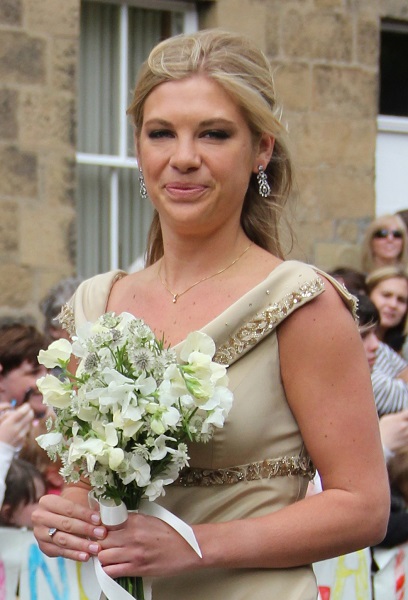 Who is Chelsy Davy’s husband? Is she married? Does she have a boyfriend? What is she doing now? These are a few of many questions people are curious to find the answers about Prince Harry’s ex-girlfriend.

Chelsy Davy is a Zimbabwean businesswoman born on 13 October 1985. She is the owner and founder of AYA, an exclusive jewelry range capturing African beauty and AYA Africa Travel. She is best known for dating Prince Harry.

Is Chelsy Davy married? Who Is Her Husband?

Chelsea attended Prince Harry and Megan Markle’s royal wedding in 2018, where she flaunted a gold ring on her ring finger. She was spotted with her date James Marshall at the event.

However, the engagement rumors were never confirmed, and it is not known if she is married or not.

Where Is Chelsy Now?

After the breakup with Harry, Chelsy moved back to Zimbabwe to escape the unnecessary media attention. She returned back to the UK and started working at a London law firm, Allen and Overy. She studied at the Gemological Institute of America from 2015 to 2016.

Chelsy launched a jewelry range AYA in 2016, and in an interview with Tatler, she revealed that AYA would start a new branch for tourism.

She loves traveling with her friends and family, as evident by her Instagram posts. She is currently quarantining with her dog Biscuit Bear.

Long before actress Megan Markle came into Prince Harry’s life, he was once in a serious long-term relationship with Chelsy Davy. The couple started dating in 2004 when Chelsy was still a boarding school student.

The couple had an on-again-off-again relationship for few years before calling it to quit in 2010. In 2016, Davy revealed that it was difficult for her to date a high-profile royal. The attention she was getting was scary and uncomfortable.

She was trying to live a normal life, which was impossible due to public attention. Despite breaking things off, she is still good friends with her ex-partner.