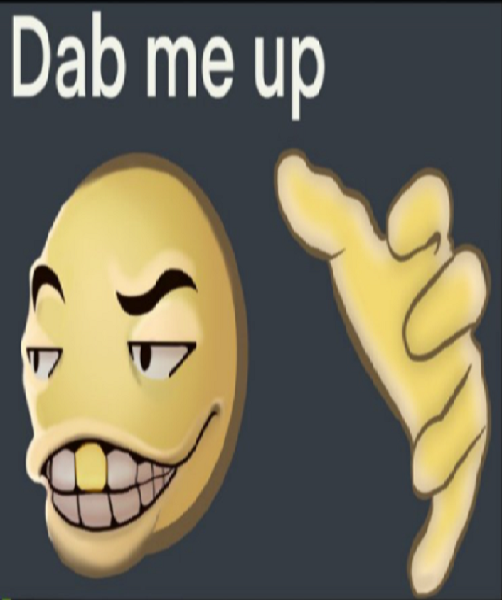 Dab Me Up meme has become the hot potato on Twitter. But where did it come from? What does it mean? let us dig into this article.

Memes and emojis on smartphones make the conversation more fun and interesting. Whenever people feel bored or get some unique content on anything they make it a meme and post it the social networking sites.

Similar to that, Dab Me Up is an image of a yellow smiling emoji. The exciting part is that it has a gold tooth. It looks like it is trying to dab someone up with one hand.

Dab Me Up Emoji Meme

Dab Me Up looks like an emoji that we all have on messenger. However, it’s somehow different from other emojis.

It’s a photo of a yellow smiley emoji having a gold tooth and a hand right above as if it’s about to dab someone up.

We can search for Dab Me Up on google. You can find lots of memes based on it.

What Is The Dab Me Up? Meaning Explained

Well, Dab Me Up simply means a sweet handshake as per Urban dictionary.

We all know the meaning of Dab, right? It means, If he/ she gently touch/ pat on our shoulder.

As a matter of fact, if someone says Dab Me Up, then they are asking you to dab them.

Perhaps, it is a way of saying hello to them or well done.

Well, it’s not that difficult to get Dab Me Up Emoji on Twitter.

You simply search it by Dab Me Up.

emoji that looks like oscar the will smith fish from shark tale gold tooth dap me up dab me up ight pic.twitter.com/wFshCivifR

One of the Twitter user called @reactjpg has shared the reactions of other emojis that looks similar to Dab Me Up.

It’s not confirmed yet who created the meme? One thing is sure, the image is mostly used online while texting. It does make the conversation more exciting and fun for sure.