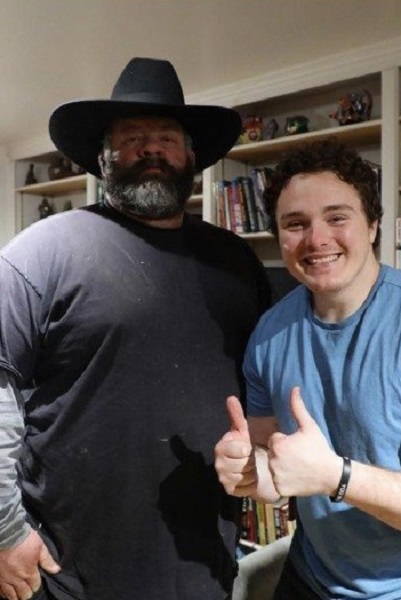 Tex And John are the viral son and father duo in Tiktok. The account boasts over 47.6M likes.

Tex recently updated the Tiktok bio as “Rest Easy Dad.” John has reportedly passed away, having lived an amazing life full of hard work and love.

Likewise, fans have come to pay tribute to the late grizzly bear.

Who Are Tex And John On Tik Tok? The Father-Son Duo

Tex and John on Tiktok are a popular son-father duo.

They are popular for posting relatable content exploring the dad-son relationship dynamics. In fact, they used to upload for over 2.5 million Tiktok followers.

Sadly, father John Kelly has recently died. The news was first shared by Tex via a heartwarming Tiktok, captioned “You’ll always be my hero. Until next time Dad. I love you so much”, where he created a montage of his father’s previous videos.

John Kelly’s death comes as a shock to all of us.

However, Tex Kelly has not disclosed the circumstances that led to John’s sad demise. They had last posted a Tiktok together on July 28, which also included Tex’s mother.

We are giving space to Tex and John’s family right now and still waiting for an update from Tex.

Among Tex and John, Tex is the age of 24 years old.

He is the former CEO of his own brand management and production company. Similarly, he is an aspiring actor and comedian.

On the other hand, John was the co-owner of Humboldt Construction. At 6 feet 6 inches in height and 380-pound weight, fans used to call him Papa Grizzly Bear.

A resident of Eureka, Tex, and John started making videos as a joke. They became a viral sensation after posting a prank video, where the account gained 26,000 followers overnight.

Moreover, Tex and John were also featured on many Youtube compilations together.

They have been mentioned in various sites such as Right This Minute, LAD bible, and Daily Mail UK. However, Tex and John don’t have a Wikipedia bio.

Tex and John must have collected decent net worth from their career. As a fact, Tex has even launched a Merchandise line.

Nevertheless, Tex set up a Go Fund Me account, seeking financial help after his dad’s demise. He wrote, “life is unapologetically continuing all around us with hospital bills and expenses.”

We send our thoughts and prayers to John Kelly’s friends and family. May his soul find peace in heaven. Thank You.