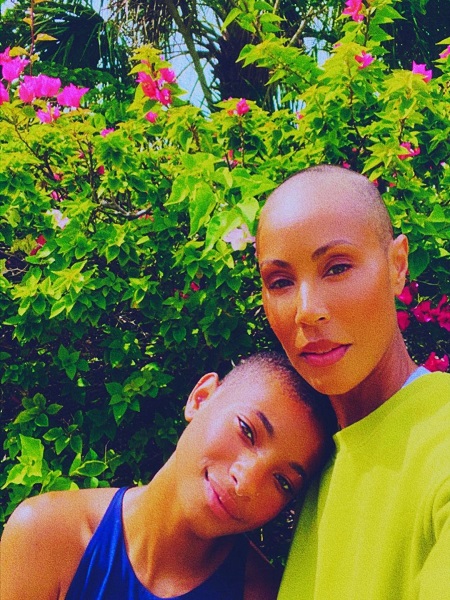 Does Jada Pinkett Smith have cancer? No, her hair loss and health rumors are the results of a disease called Alopecia.

Actress Jada Pinkett has always been open about her personal life. Whether it be her past flings or her struggles with the disease.

The host has also been open about a terrifying disease, from which millions of Americans struggle every year. It is a condition called Alopecia, which results in hair loss.

She re-shared the photo originally posted by her daughter, Willow Smith, who also happened to shave her hair. Jada captioned “Willow made me do it because it was time to let go… my 50’s are bout be divinely lit with this shed”.

This led many people to speculate that Jada Pinkett Smith might have cancer as hair loss is very common in cancer patients under chemo. However, the rumors are not true.

Actually, Jada Pinkett Smith’s health is fine. However, she is suffering from a non-life-threatening disease called Alopecia.

Alopecia is a condition that causes the hair to fall in patches. It happens when the immune system attacks hair follicles. Over time, these patches connect to become noticeable.

The reportedly disease affects around 6.8 million people in the USA alone. Though the symptoms are mild for some people, patients with severe cases can have hair fall in their entire body.

In the past, Pinkett Smith has been open about her Alopecia illness. In fact, she admitted to keeping her hair short due to the hair fall.

According to experts, cases of Alopecia like Jada Pinkett Smith are not recommended for surgery.

Many people want to get hair transplant surgery to treat the conditions. However, unless the affected area is “burned out” transplant is not considered for Alopecia.

Even the Red Table Talk host stated that she consulted multiple experts and doctors. But, all of them came to no conclusions.

She added it was certainly terrifying at first. Nevertheless, the actress has come to terms with the disease and her shaved hair is an example of it.

Jada does have a support system like her singer daughter, Willow, who shaved her hair to support her mother.

Moreover, Pinkett’s openness about Alopecia has also become an inspiration for many people. Many people came forward to share their own story after Jada shaved hair.