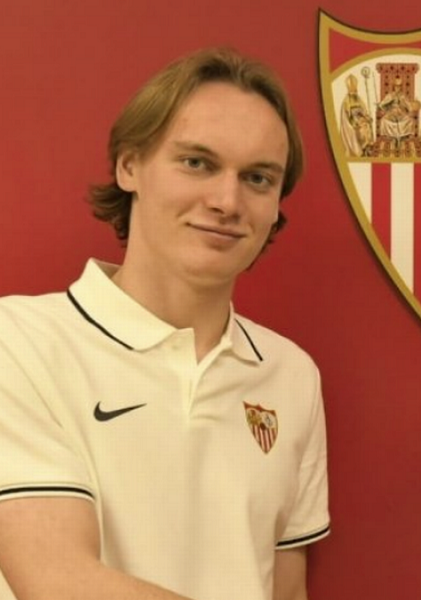 Ryan Johansson age has just reached 20 and he has already played in three nations. Lets find more about him and his football career.

Ryan is a Football Player. He plays for the Spanish football giants Sevilla Football Club.

Johansson was born in Luxembourg. In fact, he has his birthday celebrations on the 15th of February every year.

Ryan’s football career began in Luxembourg. He played for RFCU Youth Club for a while. Then, he played for Metz Youth FC for about a year.

Soon, Ryan signed for Bayern Munchen FC, the German football giant, in 2017. In fact, he played at both of the U-17 and U-19 levels for Bayern.

Similarly, he joined Sevilla FC after a while. He plays in the Segunda Division, the second-tier football league of Spain.

Johansson’s height reaches 6 feet and an inch or 187 cm.

Johansson is a midfielder with a more central role. Also, he can shoot with both of his feet.

As per his TransferMarkt profile, Johansson has made only a single appearance for Sevilla in Segunda Division.

Besides, he has played just for 18 minutes with the club.

Ryan has a six-year contract with Sevilla Atletico. He has not been able to play because of his hamstring injury. He is yet to play since the December of 2020.

Interestingly, he has a market value of 100 thousand euros.

Ryan Johansson’s parents are his Swedish father and Irish mother.

His mother, Christine, is from Mullingar, a town in Westmeath County of Ireland. In fact, Christine was born in England to her Irish parents.

Also, his father, Thomas, is from Sweden. His parents live in Luxembourg, where he was born.

His Nationality: Is He Irish?

He can play for the Republic of Ireland, Luxembourg, and Sweden sides. In fact, he earned his eligibility to represent the Irish International football team a couple of days ago.

Sevilla’s Ryan Johansson has been given the green light to pursue an international career with Irelandhttps://t.co/b5l6cu3k6E

Interestingly, he can play against Switzerland, Australia, and Denmark soon with Ireland’s U-21 team.