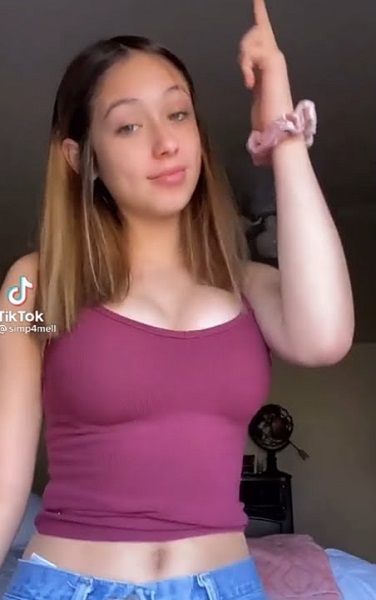 Who is Simp4mell from TikTok? Simp4mell is a TikTok star who has rose to fame after accepting the recent challenge where you dance on the Vivi Trend song. In this article, we will be focusing on both Simp4mell as well as the popular dance trend, so do stick until the end!

The Vivid Trend song was popular on TikTok for almost a whole month, and even at the starting of February, it seems that this trend is not going to stop. Although the trend has been loved by many, there are controversies, which we will discuss later in the article.

Who Is Simp4mell From TikTok? Why Is She Getting Popular?

Simp4mell is from TikTok, and she has already managed to earn nearly 140.4 thousand followers. However, this was not the case until January 17, when she decided to upload this TikTok video that went viral in a concise period of time.

The TikTok video has gained a total of 578.5 thousand likes, which is clearly the most liked video in her TikTok profile. She became very popular after she danced on the viral Vivi Trend Song.

TikTok’s The Vivi Trend Song: Lyrics And Name Of The Song:

TikTok has always been a platform for songs to go viral, and all thanks to this popular social media that has helped The Vivi Trend song to go viral too. Here is the song’s real name – it’s called YRN, and it was composed by Migos, a popular Hip Hip trio.

As a Hip Hop trio composed it, it is obvious that the song has Hip Hop lyrics there. In fact, if you have seen the dance trend on TikTok, you already know how the lyrics are, and according to a lot of music lovers, the song is very catchy!

More About The Vivi Trend Song: Everything To Know About The Controversies:

Great! You have stuck until the end, and as we said earlier, we will be talking about the controversies right here! According to reports from HITC, the dance moves that the TikTok users have been using in the new trend has upset a lot of K-POP fans.

Apparently Red Velvet’s Russian Roulette dance routine is trending on TikTok but people aren’t dancing to the song itself and haven’t given credit for the dance’s origins. 😔

Well, they claim that the dance was stolen from the popular K-pop girl band Red Velvet. Now, a lot of them are showing their anger on social media.